Houston Brothers: Of Space, Time And Family
Interview and photo by Daniel Coston
for Tangents Magazine, and the Tangentsmag.com website.

You have to see, and hear this band. This was among the many things that people said in trying to describe the Houston Brothers when they first appeared around Charlotte in the early 2000s. Two brothers, Justin and Matt Faircloth, playing two instruments simultaneously, and singing songs that grabbed your attention, no matter how many people were in the band. Cut to 2016, and the Faircloth brothers reconvened again, and sound just as good as they good when many of us first heard them. The Houston Brothers is the story of music, ideas and family, and Justin Faircloth spoke about it all via email.

Daniel Coston: After a few years away, you’ve reunited the two-piece version of the Houston Brothers. How did this come about?

Justin Faircloth: It’s in our blood, really. Matt and I both love music--playing music live and recording in the studio. We've been at it as the Houston Brothers for over 15 years, sometimes actively and other times not. Most recently we've been in a dormant state for a couple years--living in different states, Matt and his wife had two daughters. . . life has been busy. I’ve been making music in other bands and in other ways.  But late last year we decided that it was time to reconvene.
Coston: What is it about the music that you make with your brother that is unlike any of your other projects?

Faircloth: It's fun and weird and stripped down to the bare minimum.  At least hopefully so.  When we are at our best everything is really sparse and every sound has its own place to unwind and ring out.  This is very hard with a larger band unless you chart out all the parts or have a ton of discipline.  Which we don't really want to have.  Matt and I never play the same thing twice--our thing is highly improvisational by design.  So we want the clarity of a studio recording with some fairly open structure to let things happen wildly.  I think people enjoy watching us flail around and try to pull it off imperfectly.  Sometimes we do.
Coston: How did the original two-piece lineup come about?

Faircloth: We had been playing around with the idea of a small band for a few years, living in Wilmington and then in a few different places, catching up from time to time.  Then Matt moved back to Charlotte to join the Goldenrods.  That was Benji, Rainy Day, DK, Mark and me.  Matt was young but he dropped right in.  That band was a gorgeous, reeling testament to six-man excess.  Benji’s songs were of the highest quality, and we had a wild time. We loved it.  And, simultaneously it was the perfect opportunity to balance that experience with our experiments in minimalism.  We also had things to say and creative ideas to offer lyrically.  It was time.
Coston: You play keyboards with your right hand, while drumming with your left band, all while singing. 1. How did you come up with that? and 2. How do you DO that?

Faircloth: I don't know, and i don’t know.  Piano is percussion, at least in my world.  Perhaps that's why I break keys so often.  It seems pretty ordinary these days, honestly.  It's the instrument I play in the Houston Brothers. . . it just makes sense in my mind. I’ve often said that I think what Matt does is more difficult (guitar and bass pedals), just less flamboyant and obvious!
Coston: Any plans for new recordings?

Faircloth: Yes!  Just finding the time.  We made a pretty major investment into our home studio this year and are starting to track on 8-track tape.  Most artists would go back and change aspects of their past work, and for me that would easily be the amount of tracks, overdubbing, orchestrating, "fixing" and "correcting" bits of our studio recordings.  I see those processes now as impediments to our more organic and free qualities.  So, yes, slowly writing, experimenting, processing the events of recent years and learning how to interpret them as a band that's relevant to who we are today.  It's interesting to me that the older I get, the more I want to hear things as they originally occur, unadorned and raw.
Coston: Many fans of the Houston Brothers have stayed with you for over 15 years. Their response at recent shows must have been heart-warming.

Faircloth: It's wonderful, truly. There are some brilliant creative minds in Charlotte, and NC, and we have been very fortunate to keep some great company over the years. I think that much of our appeal is that we have always tried to do something that is true to who we are and something that is dark and beautiful.  That's what I often want out of art and I think people see that in us.
Coston: Do you remember the earliest times that you played music with your brother?

Faircloth: A little.  We are 5 years apart, which is nothing now, but as kids that was a significant gap. He had his own musical crew of guys, some of whom have gone on to become important Charlotte musicians, and I had mine. Around the time that Matt graduated from high school was when we really started sharing ideas and talking about creating something together.  I remember being very happy and a little surprised at what a soulful, expressive musician he had become.
Coston: Tell me about some of your records that you’ve played on, and bands that you’ve played with.

Faircloth: Many, in one form or another.  The studio that we ran from 2000-2005 or so, Cougar Camp, allowed us to interact with lots of great musicians.  We were sort of a workshop studio thrown together in a little house in Wilmore.  Not at all pro, but very creative and it was crazy fun.  But going back, Dave Wilson (Chatham County Line) and I had a band together in college with some dear friends now in Portland.  I played in Jennyanykind during the Revelater days--what a visionary record that was from the Holland brothers.  That also taught me something about how two brothers can share a singular vision musically. The Rich and Famous out of Asheville, and Gank Magazine. Flyweb, Jolene, Lee McCorkle, then Goldenrods and Les Dirt Clods. Through the Camp came Benji Hughes, Kenny Roby, Nicole Atkins, Bruce Hazel, Babyshaker, the Talk, 10,000 Armies, so many development projects with Shawn Lynch and D.K (David Kim) on session work. We did contract film work.  Great collaborations with Pyramid and Sea of Cortez. Played keys on so many studio sessions, I honestly don’t know where to start. That was a magical era in Charlotte music for me.  I'm sure I'm forgetting some important ones.  These days I play keys in Ancient Cities. Stephen (Warwick) and Justin (Fedor) have become dear friends and we have a blast channelling all sorts of influences and experiences.
Coston: How has the Charlotte music scene changed over the last 20 years?

Faircloth: Some of our important venues are gone, first off.  That's a tough business. I have great respect for guys like Scott (McCannell) of Snug and Joe (Kuhlmann) of the Muse that are still providing a great service to Charlotte. I mean, I came home when I was 24 and jumped into all of this with passion and fire, and here we are almost 20 years later.  I still love it, but for different reasons. There are kids now that remind me of myself then, and that's exciting for them and me. I still think that the majority of Charlotte residents are completely out of touch with what is happening in their city creatively. But perhaps that is beginning to change a little.
Coston: At the end of the day, what is the best part of the Houston Brothers?

Faircloth: It's family.  Not just literally, but figuratively as it has come to include many others that are important to me. We have a responsibility to keep it real and make it worth listening to. 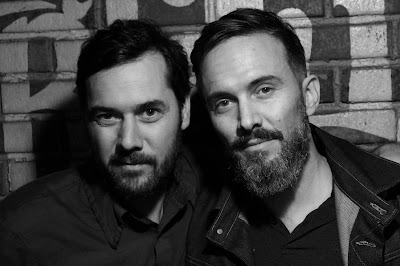 Posted by Daniel Coston at 5:58 PM