In September of 1997, Jerry Lee Lewis played a music festival in Charlotte, in the middle of Tryon Street, in a stage that was less than a foot tall. I was several months into my discovery of photography and music, and seeing Jerry Lee was an absolute must, even if the Foo Fighters were playing at that exact time, several blocks away.

Knowing of the Killer's reputation, I originally hid in the crowd with my camera. For whatever reason, and feeling that I had nothing to lose, I found a place on the ground in front of him, although I kept my distance by shooting with a zoom lens.

On any night, Jerry Lee was something else. On a night when he was in a good mood and having fun, it was something special. I shot all four rolls film I had in my bag, the most I had photographed any artist up to that point.

I also noticed that Jerry Lee had an amazing guitarist to his right, although I could never catch what his name was. When someone asked me the following week, "Was James Burton with him?" I figured out who that guy had been.

At the end of the night, Jerry Lee starting tapping on his drummer's cymbals, and smoking a pipe. "Jerry's in a really good mood tonight!" an older man next to me exclaimed. It was one of those shows that continued to make me a believer in music, and made me a better photographer.

And yes, I did still make it over to catch the end of the Foo Fighters set. After Jerry Lee was done. 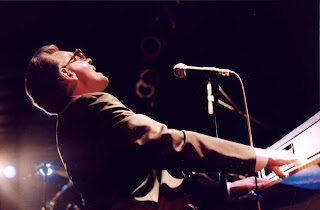