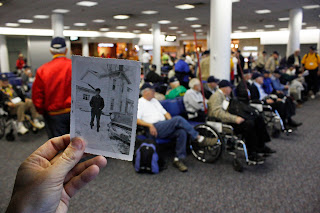 I was asked to photograph a Flight Of Honor last week. Since the World War II memorial opened in Washington earlier this year, many cities have been organizing trips for local WWII veterans. Last Saturday's was the last in Charlotte, for now, until new sponsorship can be found.

So why was I out there at 6am to photograph a group of veterans that I've never met? My friends in the WBT Briarhoppers asked me to do it, so I could photograph them playing to the vets. But largely, it was for personal, and sentimental reasons. Both of my grandfathers fought in World War II. My mom's father (whom I recently wrote about on what would have been my grandparents' 66th wedding anniversary) was a staff sgt., and was on the lines through North Africa, Italy and D-Day. My dad's father was in the Navy for the last year of the war, long enough to be on a ship that was torpedoed and strafed by the enemy, but did not sink.

My dad's father got to visit the Memorial earlier this year, but George (my mom's dad, and someone I was closer to than nearly everyone I've ever known) passed away in 2000, as the plans for the memorial were being drawn up. He had told me that he didn't need to see it, or the D-Day memorial, or the various things that they've built for veterans in the past decades. He didn't need to relive it again. But he still stayed in touch with his friends. His buddies, his fellow survivors. He outlived most of them, but the shared experience never diminished.

So here they were. A couple hundred people whom I never met, yet I knew all of their stories. The look in their eyes when you talked about "that time." The weary look of pride as the years came flooding back. It was there. Like I once saw in George's eyes, and now I sometimes see in my own.

I wore a photo of George pinned to my shirt. I couldn't find a photo of him from those days at 6am that morning, but I did take a photo of him from 1959, standing proudly in front of my grandparents' house. I wanted him to be there, in some physical and emotional form. Would he have gone on these flights? I don't know. If his friends were still around, perhaps. But maybe that is what tied the morning together, for me. What is the human race, but a series of friends, and loved ones that we hold close to ourselves? They may no longer be with us, in the physical sense, but our shared experience never changes. And in that sense, they will always be with us, no matter where we, or they go.

Enjoy your flight, kid. From your old kiddo,
-Daniel

P.S. Yes, I'm a sentimental fool. But my heart would not let me act otherwise.
Posted by Daniel Coston at 2:05 PM

Email ThisBlogThis!Share to TwitterShare to FacebookShare to Pinterest
Labels: Essay