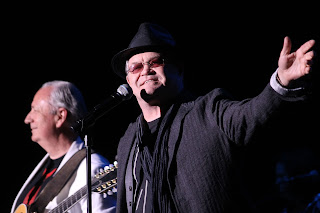 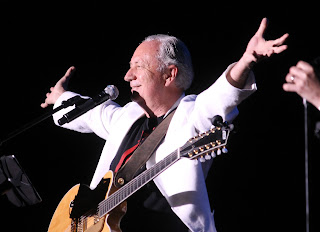 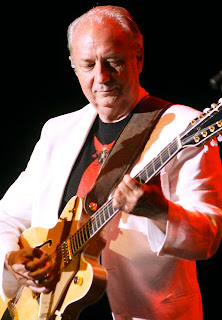 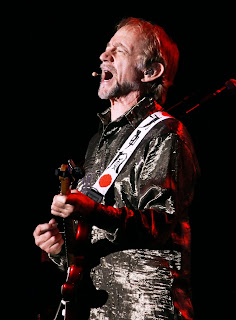 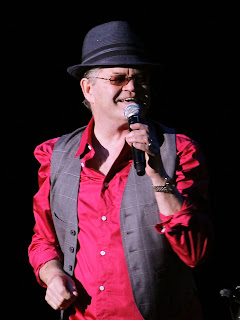 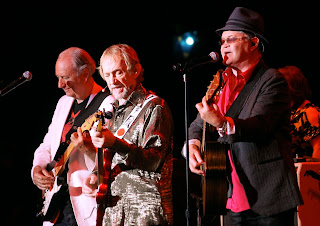 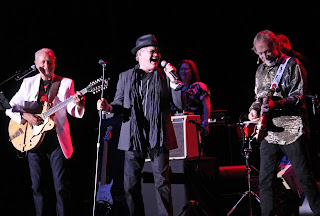 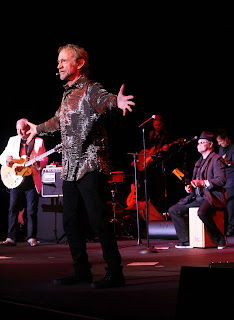 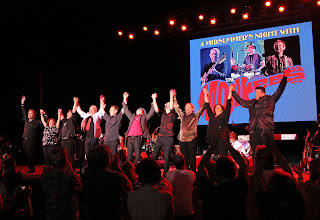 If you're in Charlotte, you may notice that I took the photo on the August issue of Society Charlotte magazine. While it's still cool to see my photo on a magazine cover, this wasn't the original plan. A good friend of mine had originally been slated to shoot this cover. When that did not work out, I was asked to put together a cover photo from the event, which I had shot for another client. It took a lot of work, but I put together a good cover shot. Still, I feel a bit sheepish for having to do this, having been in the position of the other photographer in my younger days. That being said, I'm glad that my photo helps in supporting the local chapter of the American Diabetes Association, and to the other photographer, I promise that you have many more cover shots to come, and I look forward to seeing them.
-Daniel
July 29, 2013
Posted by Daniel Coston at 5:50 PM No comments:

If You're Visiting This Site From The UK, You Can Buy Both Of My New Books Here

You can also buy the NC Musicians book in ebook and Kindle form on both sides of the Atlantic. Thanks for letting me do the momentary plug for both books.
-Daniel
July 28, 2013
Posted by Daniel Coston at 10:55 AM No comments:

I showed up at the game in the final inning, not having known that the game had started an hour early, due to incoming bad weather. I hadn't planned on taking photos, but there was no other media around, so I grabbed my camera. I attended my first state Little League tournament in 1985, and it was great to finally see a local team take the title.

I'm really proud of the first shot in this set. You can see all of the kids in this shot, running with the state banner they'd just been handed. One of the best sports photos I've ever taken, period. Not bad for something that was a stopover, on my way to another gig.

Posted by Daniel Coston at 6:14 PM No comments:

Email ThisBlogThis!Share to TwitterShare to FacebookShare to Pinterest
Labels: Baseball

It's Here! The NC Musicians Photo Book Is Now Available! 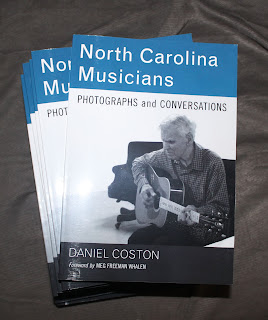 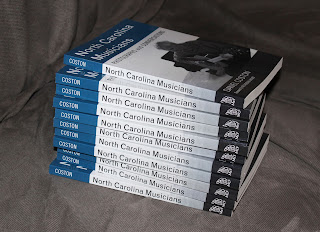 It's here! It's finally done, and in print! Actual physical copies of my new book (yes, my other new book), North Carolina Musicians: Photographs and Conversations, just arrived. This book is both written and photographed by yours truly, and features 140 photos, 19 interviews (including the Avett Brothers, Carolina Chocolate Drops, Matrimony, Si Kahn, Tift Merritt, and many, many more), all covering my 17 years of taking photos of the great musicians in this state. Ask for this book at your local bookstore, or go here to purchase it on Amazon, via the link below. I'll also be holding my first booksigning for this book at Park Road Books, in late September. More news soon on this, and my thanks to everyone that had any involvement with this project.
Thanks,
-Daniel
July 24, 2013

I meant to sit down and write last night about two friends of mine that are sadly no longer with us, when I learned about the passing of Faye Hunter. Faye had been a founding member of the legendary Let's Active in the 1980s, but more importantly, she was a friend and inspiration to many in the Winston-Salem, Chapel Hill and other musicians in cities throughout the world. She was friends with everyone, and we all cared about her, which has made her passing so hard to take.

If you have the chance this week, tell the people that you love that you care about them. Talk to them, see how they are doing. The action may not save lives, but it will mean something to you, and the people you care about. The world moves too fast, but one should always find the time to smile, and say thank you.

My photos used in an NPR feature

Dwight Moody seemed to be in constant motion for almost his entire life. He traveled the world many times over, and made friends everywhere he went. His occupations were many. Soldier, preacher, radio and TV show host, record label owner, show promoter, publisher, writer, husband, father, and as I stated before, friend. But he was a musician, first and foremost, in an unbroken line that started before the birth of bluegrass, and far into the 21st century.

By the age of 16, Dwight had formed his first band, the Virginia Playboys. He would soon play with the likes of Clyde Moody, Hank Snow, the Stanley Brothers, and many, many more. After two years of distinguished service in the Korean War, he returned home to marry his beloved Cathy. He and Cathy would go on to sing together for many years, and host radio and TV shows throughout North Carolina in the 1950s and '60s, all while raising three boys.

In 1962, he formed Lamon Records as an outlet for his gospel music. Lamon continues today as a successful record label, heaving released records from the likes of the late Billy Scott, and several records by George Hamilton IV, with whom Moody also toured with for a number of years. In the late 1970s, Dwight Moody and Lamon released albums by the Briarhoppers, the legendary Charlotte, NC quintet that had been popular for years on WBT radio. In the early 1990s, Moody joined the Briarhoppers, and helped the group be nationally recognized for their many decades of music heritage.

I first met Dwight in 2002, when I went to photograph the Briarhoppers at a local awards ceremony. Almost immediately, I'd felt like I'd known Dwight for years, and he often called me his "adopted son." I admired his spirit, his stories of traveling the world a million times over, and the ongoing wish to create something new. New adventures, new travels, new possibilities. I saw something in Dwight that I recognized. My mom's father, whom I still miss every day, friends that I had met along my travels, and perhaps, something of myself.

In late 2011, Dwight returned from another tour of Europe, and contacted double pneumonia. He miraculously survived, although his health was never the same. The rambling boy that had always done everything with his own two hands now needed help with his breathing, and a new place to live.

Dwight moved into a retirement community in Mint Hill, NC, and while the staff and new friends took care of Dwight, it became harder to reach him. The cellphone reception at the home was terrible. Calls didn't go through, messages not received. Dwight and I had been working sporadically on a book on the Briarhoppers, based around my photographs of the group. Time was lost as I either couldn't contact him, or couldn't get around the home's increasingly busy schedule for Dwight. In the meantime, I got distracted by writing another book, and then another. As I sit here, two months after losing my dad's father (whom I also wish that I had talked to more), I am frustrated that those windows are now closed. Much like Dwight himself, I always wanted to do more, and have more time with him. But perhaps, that is part of Dwight's greatest legacy. After all the years of travels and music, after raising three boys, who grew up to form the Grammy-nominated Moody Brothers, and all the years of stories and accomplishments, there was still more that Dwight wanted to do. Time did not run out on Dwight, time itself just couldn't contain him, anymore.

While I am glad that Dwight is no longer in physical pain, it is a struggle for me to think about his traveling days being over. No more trips to EuroDisney, performing with his son Carlton, or to play on WSVS in Virginia, or anywhere that George Hamilton IV was traveling to. But perhaps, the traveling is not done. It is possible that our spirits go beyond the physical plain. That our bodies are not a cage, but a vehicle for what we want to accomplish while we are here in this place, and it is something that we leave behind when we go on to our next destination, or next gig. For in that possibility, Dwight Moody will continue to travel on, and those of us that were lucky enough to know him will take those experiences with us. And we will be comforted in knowing that someday, when our next showtime arrives, Dwight will be there, fiddle in hand, and he will smile as he says, "Good to see you again, old friend."
RIP
Safe travels, Dwight.
-Daniel Coston
July 12, 2013

Posted by Daniel Coston at 11:53 AM No comments:

The Mighty Manfred of the Woggles will be plugging our book tomorrow afternoon (July 10th) during the 1pm (East coast time) slot, on his SiriusXM Underground Garage radio show. Listen for that, and for him to play "Abba" by the Paragons. Boss!

And don't forget to check out my interview on Ashevillefm.com this Thursday afternoon, during the Riffin show, about the book. The show airs from noon to 2pm. Talk to you all soon,
-Daniel
July 9, 2013
Posted by Daniel Coston at 5:46 PM No comments:

Indexing More Than You'll Ever Know

I've had to spend a few days creating the index portion for my forthcoming NC musicians photo book. More soon, once my system has recovered. Thanks,
-Daniel
July 8, 2013
Posted by Daniel Coston at 4:46 PM No comments:

I'll be appearing on the Riffin show on Asheville.fm, a web-based Asheville radio station, this Thursday (July 11th) between noon and 2pm, to talk about my 1960s NC book. You'll also be able to stream the show for a week afterwards. Set your coordinates to www.ashevillefm.com. See you then,
-Daniel
July 7, 2013
Posted by Daniel Coston at 7:29 AM No comments:

Was It All A Dream?

This summer brings some remarkable milestones to my mind. July 5th will mark ten years since I photographed Johnny Cash's final public performance. That show, and the June Carter tribute show that he had performed on June 21st, 2003 were two of the most amazing days in my life. I look back on that summer, and can't believe what I was able to document. Mr. Cash, two days in Nashville photographing Les Paul, Arthur Lee & Love playing "Forever Changes" (apart from the emotional pull of the Cash shows, Love was the best show of the year, in my book), Jayhawks and Thorns in Nashville, TN, two days before the last Cash show. So many shows, and experiences. It was a fun, confusing, emotional, complicated and amazing time. I wanted to stay on the road full-time, and almost didn't come back home. I'm not sure that I could live that way again, but sometimes, I still think I'd like to try.

I think back on those shows, and those experiences, and I sometimes think, "Was it all a dream?" I know that it wasn't, and thank goodness that I took so many photos. In time, much of our life's experiences seem distant, far away in the back of our minds. But the experiences are still there, still shaping who we are today, and in the future. Life is to be experienced, and enjoyed. I've tried to live with as few "What If's" as possible, and continue to. I may not ever re-live that summer of ten years ago, but I still dream of something new, and that is always a good dream to hold onto.
-Daniel
July 3, 2013
Posted by Daniel Coston at 10:13 AM No comments: