The Unknown Mountain Of Film 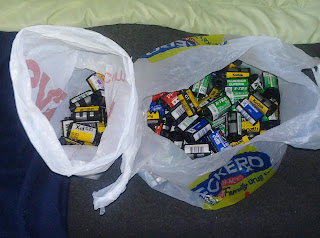 In past years, with work increasing, and money belts tightening, I did not always process every bit of film I shot. I would say, "I'll get to it," and it would go into one of my storage shelves. "I'll get to it," eventually grew, and grew.

Last month, I decided to gather all of my unprocessed film, and see how much I had. You can see how much by the photo above. Tons of color rolls, about 8 B&W rolls, a handful of slide film (including one roll of Kodachrome), and other intriguing items. At least one roll goes back ten years (a roll of slide film that I took of the Mississippi River in 2003, on my way back from SXSW), and many are six to nine years old.

What's on those rolls? I'm not sure. There's a few things that I hope to find, but I don't know if I'll find them. A few rolls do have some markings, but the rest are a mystery. I'll keep you posted on what I find, and I'll post some of the pics here.