Mary Patricia Collins was born March 15, 1917. She and her family grew up in Rochester, NY, on 10 Ethel Street. From the beginning, she was smart, independent, and very determined. She also the one that looked after her siblings from an early age, despite not being the oldest. When her father’s business collapsed during the Great Depression of the early 1930s, she began to look after her own parents, as well.

Her family didn’t know what to make of Mary beginning a long-distance courtship with my grandfather in the summer of 1934, after they met at a fair. He won her a small clay dog at one of the fair’s games. They held on to that dog for the rest of their lives. But Mary, as she often did, did she wanted to do. 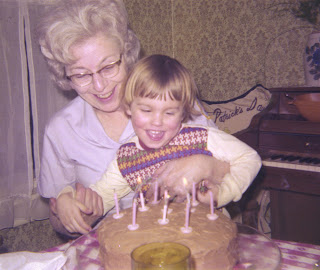 George would occasionally come to visit her in Rochester, spending all day driving there and back from Phelps. They continued the courtship this way for six years. During this time, Mary rose to become head stenographer at Bausch & Lomb, in Rochester. She made less money at that job than George did at his job, shoveling coal in Phelps, but she was the only breadwinner in her household, with two parents not working, and two brothers studying to become priests.

1n 1940, my grandfaher wasn’t ready to settle down, so he enlisted in the army. He hoped to be done within a year or two. He didn’t come home for four and a half years, as World War II changed everyone’s lives. Yet Mary stayed with him. “He who waits also serves,” she used to say. And what a long wait that was. Campaigns in Africa, Italy and D-Day. She kept the telegrams telling her of his injury in France, and his subsequent recovery.

When they finally married in September of 1945, Mary left her job at Bausch & Lomb, and began to raise a family. It was not always easy. Money was tight, and the home they had on 44 Park Street in Phelps always needed work. But they raised four kids, and George and Mary always found time to have fun. To dance, to go bet on horses, watch TV, and visit with friends at the Town Pump. They got the most out of each day, and Mary was always the matriarch. To the house, of her family, and to anyone that visited them.

When I arrived, as the first grandchild, George was preparing for retirement from his job as the town mailman. When he did retire in 1976, Mary decided to start working part-time at the local post office, where George had just retired from. Mary had failed a driving test in the 1930s, and the experience frustrated her so much that she never took it again. So every morning, Mary would ride on her three-wheel electric bicycle to and from the post office. “There goes Mary, peddling her ass all over town!” George would say. Four years later, Mary retired, allowing she and George to both collect pensions.

My time with both of them would changed my life, and continues to inform my thinking. That living life on one’s own terms, without fanfare, was as grand a statement as any large show that one could make. If you say it, then you mean it. Keep your wits about you, even if it’s just in your head. My grandmother had an amazing sense of words. Her brother had been a best-selling author, but Mary wrote long letters in a way that just brought her sensibilities onto the page. She could also draw blood, when pushed, within the space of a few words. And George and Mary were equals. They loved and respected each other, on their own terms. They were individuals, together, through and through. They were never Grandma and Grandpa, to me. They were George and Mary, which they wanted. And I loved them for that.

Watching colon cancer take away my grandmother was one of the hardest things I have ever had to witness. The remarkable part, in retrospect, was that she lived for another year after it was discovered, and continued to look after us. I still have a fear of hospitals and doctor visits to this day, because of this. The last time I visited her in Phelps, I came downstairs late at night to find her sitting at the dinner table. We talked about everything, and I wish that I could remember more of our conversation. I held back from telling her of the gushy things that I know she didn’t like to hear. And she knew that I wanted to make things better. Recently, my mother found a letter that Mary had written me in Febraury of 1990, offering me encouragement over something that has been lost to time. Seeing those words on the page, and the postmark from M C King, was like her reaching out to me, all over again. It won’t be easy, but you’ll make it, she still says to me.

Shortly after she died in October of 1990, I dreamed that I walked into 44 Park Street again. The house seemed different than how I had known it. In the kitchen, I found Mary, taking care of a small redheaded boy, which I realized was my uncle Joe. I had walked into the house in the mid 1950s. She asked me how I was doing, how my friends were doing. She said that she was doing fine. In the dream, I noticed that the walls were red, which they not been during my time there as a child. I found out later that the house’s walls were originally painted red, and had been painted over in the 1960s. George and Mary do not appear in my dreams, although I have occasionally dreamed that I picked up a phone and hear their voice. Somewhere, wherever they are, I know that they having fun, and hoping their old kid is doing okay. What would they have made of my life? I don’t know. I have sometimes debated that question. It was finding their photo negatives in the early 1990s that planted a seed in my brain for what a photograph can mean, given time. But in me, I like to think that they recognized another kindred spirit, and would have been proud of the good things that I have done. Of which, they will always be a part of.

Mary, you have been gone for 27 years, but you never truly left. Like George, you opened a window of possibilities in my mind that I forever grateful for. And somewhere today, I hope that you and George do some dancing and drinking at the Town Pump, or whatever you feel like doing today. Which you often did. And remember that somewhere here, your old kid still loves you.