Travels With My Camera - Andy Griffith 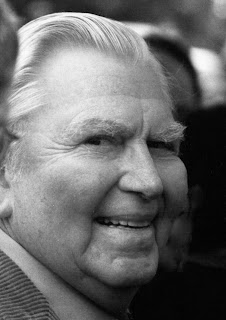 I was lucky enough to photograph Andy Griffith on three occasions. The first was the dedication of the Andy Griffith highway, near his hometown of Mount Airy, NC. Much of the town turned out for the event. I remember the event being a bit of a mess. It had rained throughout the day. At one point, it was going to take place under a tent that didn't allow anyone outside the tent to see what was going on. The crowd, and the media grumbled. After a long wait, the skies cleared, and the event began. I talked my way into the media section, far from the stage, and eventually snuck down front with a couple of other photographers.

Andy Griffith sat with the then-governor of NC, Mike Easley, and his wife. The speakers that spoke before Griffith went on forever. There was one in particular, a local politician, who gave the appearance that he had never spoken in public before. He blathered on for ever, speaking so quietly that the crowd kept shouting, "Speak up!" Ten minutes into his (and our) torture, he said, "I'd know like to introduce Governor Hunt." Jim Hunt had been the previous governor. The speaker turned bright red, and Griffith, Easley and everyone else just cracked up. We all got great photos of Griffith's beaming laugh.

Griffith finally got up to speak, and wiped the floor with everyone that had proceeded him. Not everyone on this earth is a natural public speaker, but Griffith had it in spades. He was funny, he was direct, he was suitably grandiose, using his hands in sweeping motions. He was the only speaker that day that didn't need a speaker system. It was an impressive thing to witness. I got some good photos of Griffith with his highway sign, and then he was gone.

Two years later, Griffith came back to Mount Airy, for the dedication of a statue honoring the Andy Griffith Show. It was held in the middle of Mayberry Days, an annual celebration of the TV show. Many former actors of the show were there, as well as the classic lineup of the Dillards, who were featured on several episodes of the show. I went to the event with another photographer, who somehow got into the photo pit ahead of me, leaving me to shoot from a distance. I still was able to get some decent photos, including Griffith watching the Dillards perform.  Looking back, it was an amazing day to witness.

The following year, Griffith made an appearance at UNC-Chapel Hill. He had graduated from UNC in the 1940s, and was returning to donate his archives to the Southern Folklife Collection. This was a fun event, with Griffith playing the guitar that he played on the Andy Griffith Show. I met Griffith briefly later that day. Griffith may have a public performer, but he was not a public person. Griffith didn't have much to say, and I told him that it was great to meet him. My photos of Griffith from that day are also now part of the Folklife Collection's archives.

Another thing I remember from that day was that there was an older gentleman taking photos of the event. A few times, he tried to boss Griffith around, having him pose for photos with different people. Griffith seemed annoyed, but he did seem to know the guy, and he put up with it. "Who is that guy?" I asked someone. "Hugh Morton" was the answer. Since then, I had always been a bit mad at myself for not getting better photos of Morton. When Griffith passed away, I dug out my photos of the 2002 Mount Airy event. After Griffith had left, I finished that roll of film with various pics of people posing with the highway sign. There at the end of the roll, with a camera around his neck, was Hugh Morton. I had gotten the shot I had wanted, and I hadn't even been aware of it. And that's all that I can ask for with these photos, and these experiences. Pieces of the moments, as they happened, that remind me that I'm glad I was there.