Travels With My Camera - Ravi Shankar 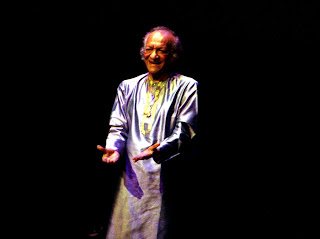 I never thought that I would get the chance to see Ravi Shankar. As the years wore on, the master of the sitar was touring less. As many older artists also do, Shankar rarely toured the Southeast US. Many artists prefer to tour in the northeast, or west coast, where there is a better guarantee of making money on the tour. This is why so many of the artists that I tend to be interested in rarely tour below Ohio.

In 2007, the Charlotte Symphony announced a show with Shankar. I was thrilled. Shankar with an orchestra! Sadly, Shankar fell and broke his hip broke his hip before the tour began. With the tour now cancelled, I figured that my last chance had come and gone. However, nearly two years later, Shankar and his daughter Anouska booked a Charlotte date. I immediately lined up a photo pass.

Shooting the show presented a different problem. I was still shooting film at the time, using my trusty old Canon AE-1. ("George," if you know of my old habit of naming my film cameras.) The venue asked that I turn my shutter sound off, assuming that I now shot digitally. Of course, that wasn't an option for me. Much of the sound in the theater was coming offstage, and was very quiet. Indeed, it was possibly one of the quietest large-theater shows I've ever attended.

The solution was simple. When the crowd applauded, shoot. If the crowd laughed, shoot. If anyone in the audience made a loud noise that covered up my camera sound, shoot. I was only supposed to have shot the first ten minutes of the show, so I snuck some photos from my seat. All in all, the time that I took photos only spanned about ten minutes, so perhaps I was following instructions, after all. I got a few good photos, despite the low light and quiet conditions.

Even at age 89, Shankar was still something to behold. He was not able to always sit cross-legged, but he sat with the sitar for the entire show. Much of the show was improvisational, as is the custom for a lot of Indian music. Shankar and his daughter traded passages on the sitar, building a layer of sound between themselves. Ravi's energy grew throughout the show, as the music still moved him to different ideas. Ravi also had a small white dog with him on tour, which came out on stage to greet him after the show.

You always hope that you get to see your heroes as many times as you can. That's not greediness, that is just one human's hopes and wishes. Once you have seen the mountaintop, doesn't one always hope to someday see it again? In the long run, it does not matter how many times that you saw, or spent time with someone. What happens is that you did spent those fleeting moments you admire. Those few stars in the sky that changed the people around you, and in the process change you. The moments are fleeting, but the influence lasts forever.
-Daniel Coston
December 12, 2012
photo copyright 2009 Daniel Coston