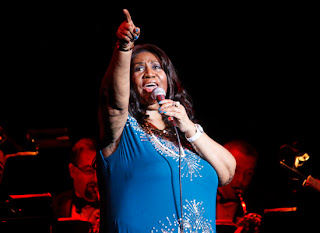 
I was at an event last month, and I happened to walk past a table of auction items. One item advertised a Music With Friends show with Aretha Franklin on February 13th. “Oh,” I thought to myself, “I need to be there for that.”
Music With Friends is a high-dollar club that promotes shows with big-name artists, performing in smaller venues that they would usually not get to play in. I photographed a Music With Friends event in 2007, when the Observer sent me to photograph Jackson Browne at the McGlohon Theater, a 660 seat venue that was built as a church in 1909. Browne did a special performance of “Stay” with the song’s writer and original performer, Maurice Williams, and later proved to be the start of my ongoing work with Maurice.
Two weeks before Aretha’s show, I asked my editor at the Observer, Olivia Fortson, if she could find a way for me to photograph her show. Olivia called Music With Friends’ director, Larry Farber, and just like that, I had a pass to shoot the show. On Saturday, February 11th, I was finishing up my fifth shoot of the day, when somebody showed me their IPhone. “Whitney Houston, dead at 48,” it read. I was surprised, like everyone else. Then I remembered that Aretha Franklin was Houston’s godmother.
The day before the show, I wasn’t sure what was going to happen. If the show had been postponed, or canceled, I wouldn’t have been surprised. I have seen many great musicians pass on shows for less than losing one’s goddaughter. However, when I inquired to a ticketholder the following morning, the word came back. The show was on.
I got to the event at 6pm, and took photos of various concertgoers. At 7:30pm, everyone was ushered into the McGlohon Theater. As I took my place with other media, I saw a camera crew standing off to one side. “They’re with ABC,” I was told. “They’re shooting this for Good Morning America, and 20/20. It’s supposed to air later this week.” I knew then that there would be some kind of tribute to Houston, but exactly what kind of tribute, I would have to wait and see.
At 7:50pm, the band kicked into their first notes. A few minutes later, Franklin walked out in a full-length blue dress, and launched into her first song. I wish that I could tell you the exact order of songs, but as I was photographing the show, I lost track of what songs were played, and in what order I heard them. However, what was memorable was that voice. You could have closed your eyes, and you would have still known who was singing. Franklin’s voice is still remarkably intact, and still seems to be able to hit high notes with ease.
Franklin took a break about a half-hour into her set, and returned about five minutes later. After performing a song from her new record, she gestured to her piano player to move aside. Franklin sat down at the piano, and started playing the chords to “I Will Always Love You.” With her background singers doing quiet back-up vocals, Franklin spoke of the loss of Houston. “She was a good person, she was a wife, she was a mother,” said Franklin. “We will never forget her.”
Franklin then began to re-arrange the chords into a gospel hymn, singing to God, and to Houston in a call-and-response manner, deeply rooted in Franklin’s gospel upbringing. “There are gates at the entrance to Heaven,” Franklin sang, “and they swung open for her.” There is something about Franklin’s piano playing that is unlike anything else in her repertoire. Heavily influenced by the gospel music of her father, the Rev. C.L. Franklin, she plays chords and notes that no other piano player could have played. Franklin seemed to thinking, feeling and singing through her hands, heart, and voice. Franklin played this for several minutes. No big production number, just very real music, and emotion. Afterwards, Franklin thanked the crowd for “sharing this moment with her.”
After bringing the mood back up with “Chain Of Fools,” someone called out for Simon & Garfunkel’s “Bridge Over Troubled Water,” a song that Franklin covered in the early 1970s. “We can do that,” Franklin responded. This gave Franklin the chance again to re-imagine the song as a cathartic gospel number, with her back-up singers following her lead. Franklin then asked for a moment of silence for Houston, which led the room in absolute silence for nearly a minute. I watched Franklin’s face, as she thought about her goddaughter.
After another song, Franklin said that she wanted to sing a few bars of a gospel song, “one that’s been on my mind for the last few days,” she said. While I did not recognize the song, Franklin made the song her own, singing with real emotion. You could see that Franklin was struggling to not get choked up. After leaving the stage, Franklin returned to sing, “Respect.” The crowd roared, and danced along.” Franklin waved goodbye, and then was gone.
In any performance, there is always a certain amount of “show.” That pretense that allows you to perform in front of an audience, be it large or small. I have been very lucky to witness a handful of shows where the pretense was discarded, if only for a moment, and the real emotion of music came through. Johnny Cash’s last shows, Bob Moog’s memorial, and now this. One of the Carter family once told me that with the Cash shows, “You got here at the right time.” And I would like to think that I, who had never seen Aretha Franklin perform, was lucky again to arrive at a important moment in time.
-Daniel Coston
February 14, 2012
Posted by Daniel Coston at 8:02 PM

Email ThisBlogThis!Share to TwitterShare to FacebookShare to Pinterest
Labels: Aretha