I really thought I would get to see you again sometime, talk to you, and listen to you play. And man, you could play. Your banjo playing had been around me all of my life. Why would I have ever thought that this day would come? Yes, all these come, someday, but for the good ones, we always hope and wish that they would stay a little bit longer. And you, Doug, were one of the good ones.

For many people, Doug Dillard was one of the Darlin boys, which made sporadic appearances on the Andy Griffith Show. In reality, they were the Dillards, a fantastic bluegrass group led by brothers Rodney and Doug Dillard. They never had any lines on the show, but their music did the talking.

When Doug left the Dillards in 1967, he jumped into session work, playing with everyone from the Byrds, the Beach Boys, Monkees and many others. Banjo player on "What Am I Doin' Hangin' Round?" Banjo player for the Byrds on their sole tour with Gram Parsons, and on Sweetheart Of The Rodeo. Two groundbreaking albums with Gene Clark, starting with the bluegrass/country/rock hybird The Fantastic Expedition of Dillard & Clark. If you get anything from this piece, go out and find this record. Along the way, Doug showed the bluegrass kids that it was okay to play freaky music, and showed the freaks the possibilities in a banjo.

I first met Doug in 2004, when he and Rodney played in Oakboro, NC. I was an eager fan with a camera, and warmed to Doug immediately. Someone at our table sat up, and nearly took Doug with him. I pulled the table back down, and Doug and I laughed like kids. We went from talking about working with Brian Wilson, to talking about working with Gene Clark. "They worked in similar days," Doug said at one point. "I'd never thought of that, until just now." Man, I wish I had a tape of that.

I saw Doug two more times, including when he and the original Dillards performed for Andy Griffith in Mount Airy, NC in 2006. I always meant to see him more, but life has a way of getting in the way of, well, life. Blink, and its gone. Gone, too soon.

Doug, you were a true individual. A wildcard among the bluegrass set. I wish that I had gotten to tell you in person, just one more time, how good it was to see you again. Maybe again, I'll do that somewhere else. But I think I could have seen you a hundred times, and felt the same way. 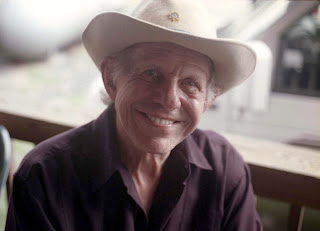 Posted by Daniel Coston at 8:05 AM